During our interview with general foreman Sander Tetteroo of De Groene Boog, he made mention of one of the biggest tunnel formwork challenges they face: connecting the walls to the tunnel floor. Due to the underwater concrete the tunnel floor’s height is very irregular. Deviations of up to +/- 75 mm are not unusual. Yet, the formwork must connect to it seamlessly. During our interview with him, Hendriks engineer Martin den Hengst explains how this is accomplished. 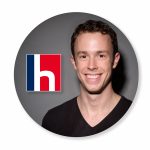 But before we get ahead of ourselves, a word about the challenge: a 2,235-metre long tunnel with a centre tunnel channel to be poured in 25-metre section lengths on a weekly basis. It’s a mouth full, which underpins the undertaking’s complexity. Two sets of formwork are used to carry out 90 pours where, even after the last pour, surface evaluation Class B1 must still be achieved. This meant that the formwork to be developed also had to provide sufficient space to be able to properly clean and re-oil the formwork after every pour to prepare it for the next pour. “De Groene Boog’s request initially resulted in a burst of creative ideas in particular to ensure a proper connection with the irregular substrate,” Martin starts off the interview. “We very quickly ended up designing a kind of ‘hydraulic caterpillar’ that can adapt itself to the height differentials of the tunnel’s floor. The formwork itself consists of mobile formwork for the centre channel, which serves as an emergency escape and service route, with two mobile half-tunnel formworks attached to it.”

To be able to connect the wall of the formwork to the floor cement-tight, the bottom part of the wall is constructed using 1.50-metre wall panels. Martin den Hengst: “The panels are equipped with a hydraulic cylinder at the top that enables each panel to be adjusted up to 150 mm in height. Each panel is equipped with a rubber strip at the bottom, enclosed in a sleeve. The panels themselves are connected together using a tongue and groove connection so they can freely move in relation to one another.” Martin about the process of moving from an initial sketch to a detailed concept: “Of course the work started off internally, but we also quickly involved the client in the concept’s further development. Working on developing the design together at a very early stage ensured that the rest of the process went more smoothly. We clearly strengthened each other. It is always good to be able to interact with each other this way.”

More freedom due to flexible positioning of tie rod holes

The interaction with the client also proved to be useful in positioning the ultimate tie rod holes. “Given the large quantity of rebar incorporated into the walls, the ease with which tie rods are installed can be problematic. It often happens that exactly at the spot where the tie rod is to be inserted, the rebar on the inside of the formwork makes it difficult to push the tie rod through. This is why we decided to use a flexible tie rod positioning system. This only requires the steel fixer to leave a horizontal strip open where the tie rods are to be inserted. This flexible positioning system allows the tie rods to be moved 100 mm in a horizontal direction.”

Given the one-week cycle it is important to avoid any unnecessary time losses. This is why, after the concrete has hardened, the wall panel of the half-tunnel formwork can be pulled approximately one metre inwards using the hydraulic sliding frames. “This provides personnel with enough space to be able to quickly and thoroughly clean and re-oil the formwork to prepare it for the next pour. The outer walls are easily positioned by the crane. This way no valuable time is lost.”

Back to previous page