A16 Rotterdam; the new connection between the A16 motorway at Terbergseplein and the A13 motorway at Rotterdam The Hague Airport, is being constructed by De Groene Boog under contract to the Directorate-General for Public Works and Water Management (Rijkswaterstaat). Part of this work is the construction of the Rottemeren Tunnel. The tunnel is 2,235 metres long and in the forested region Lage Bergse Bos is semi-submerged. A formwork solution developed by Hendriks precon is being used in the construction of the tunnel. We spoke with general foreman Sander Tetteroo about the selection of Hendriks precon. 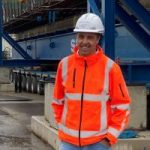 Sander forms part of De Groene Boog team, a building combination in which BESIX, Dura Vermeer, Van Oord and the TBI companies Croonwolter&dros and Mobilis have joined forces. As general foreman, he is primarily responsible for the construction of the Rottemeren Tunnel. Sheet piling was first installed, after which a deep trench was dug in which the sunken tunnel can be constructed. The tunnel floor was then constructed by divers using reinforced underwater concrete. “The tunnel had to be constructed on top of this,” Sander Tetterroo starts off the interview. “A complex challenge because the tunnel floor has an undulating profile.”

Despite the height differentials, the connection between the floor and the wall must be seamless and watertight. A number of subcontractors in the Netherlands and abroad were invited to develop a solution that could be used to build the tunnel. “We did not provide a fixed framework but gave suppliers full freedom to develop their solution.” Hendriks precon was also invited to participate; the company was one of the four companies that was subsequently shortlisted.

‘Best for Project’ as basic principle

“We then held extensive discussions with these companies and requested them to submit a proposal for the solution they had come up with. Our basic principle was to select the ‘best for project’ solution.” The proposed solutions were evaluated by a team comprising the work planner, formwork engineer, procurement officer and general foreman. “We specifically stated in advance that we wanted to work with a partner able to contribute ideas; a proactive party who is also prepared to share expertise. The proposals were furthermore evaluated in terms of the criteria innovation, safety, completeness, person hours, sustainability and a low environmental impact (environmental burden indicator).”

“After we received the proposals, the parties were given the opportunity to present their solution and to exchange ideas with us about their approach. All-in-all we invested a great deal of time in the proposal evaluation phase. We expected to be able to realise significant gains in subsequent project phases with this approach. This ultimately proved to be the case.” The all-important factor here was the weekly cycle. “We wanted to have an answer to the question: how many person hours are required for each of the proposed four solutions to achieve the required weekly cycle,” Sander continues. “After we evaluated the proposals in terms of the six criteria, Hendriks precon emerged as the party with the best overall approach. We subsequently pursued the next step with them.”

The next step consisted of the detailed engineering of the proposed solution: mobile formwork with which to pour the centre tunnel channel, the outside walls and the tunnel’s roof. “On the basis of a one-week cycle, the tunnel formwork is poured each Friday, after which the concrete hardens during the weekend. Next, each Monday the formwork is removed, driven on to the next section, cleaned and set up again so that on Tuesday the steel fixer is able to get at it. With smart innovations, such as flexible tie rod holes, no or barely any work is required on the rebar when the formwork is installed. A great example of the cooperation between Hendriks precon and the client, exactly as we had envisaged at the start of the project.”

Back to previous page